Are there 25 Interesting Things About Me?

You be the judge!

1) I’m viciously asthmatic and I’m allergic to most trees, grasses, dust mites, and a lot of perfumes.  For most of my life I’ve been on weekly allergy desensitization shots.  It’s good times.

2) My esophagus doesn’t work, at all: I have a condition called achalasia and had to have surgery when I was in high school so I could eat.

3) I somehow managed to catch Whooping Cough when I was a sophomore in high school, despite the fact that I’d been vaccinated as a child.  That was fun.

4) Natural selection has been out to get me since I was born (see 1, 2, and 3) and for the good of humanity I should probably never reproduce.

5) In high school I competed on an international level in rowing, asthma be damned.

6) I biked from across the USA last summer with two broken elbows.  I’d never ridden a road bike before and while training before the trip I struggled with clipless pedals (fell a few times)…  I desperately want to bike cross-country again, but I’m not sure if I’ll have the time.

7) Missouri is hands down my least favorite state in the Union.

8 ) My favorite states (that I biked through) are Oklahoma and New Mexico.  Oklahoma was great because it was flat and had lots of sunflower fields.  New Mexico is just gorgeous.

10) I study the development of languages over time as a profession.  By figuring out how the brain makes mistakes during acquisition (these mistakes lead to change), you can figure out how your brain is computing language, which I think is awesome.  Also, since some types of language change are systematic, you can actually reconstruct how people talked 8-10 thousand years ago (you have to work backwards from related dead languages).  I think that’s pretty freaking cool, which is why I’m getting a PhD.

12) I really enjoy being able to show off in museums by reading inscriptions.

13) I have three younger siblings (two sisters and a brother).  My brother is the youngest and  I’ve become that older sister that buys her younger brother presents for no reason.  (To be fair, though, I have been known to buy the sisters random stuff for no reason.)

15) I lived in Cairo for a few months, but my Arabic is still pretty sad.  I’d kill to be natively bilingual.

16) One of my little sisters is going to be an archaeologist.

17) I live with three roommates who are going progressively more insane (or maybe they were always insane and I’m just now noticing).  And it’s not entertaining insane, either.

18) My high school boyfriend owned a jacket that looked just like Michael Jackson’s in the ‘Beat It’ video.  This ex-boyfriend turned out fine, though.

19) I have a lot of body image issues I’m working through.

20) I’m also working through PTSD from an abusive relationship and can’t use/review/deal with realistic sex toys.

21) I love Mystery Science Theater 3000 and wish it was still running.

23) I’ll eat anything with coconut in it.

25) I went to a party at a fellow grad student’s house last night.  On the way, I slipped on the ridiculous amount of ice we have here, fell on my bag which contained a bottle of wine for the party, broke said bottle of wine, and ruined my bag and everything in it (RIP, phone).  I fortunately managed not to be speared in the side with broken glass.

I’m still getting into the swing of the HNT stuff.

I have reviews of a couple of firsts up on EF!

OK, so this is my first attempt at a video review, so please be patient with my editing skills, my nervousness, my verbal ticks, etc…

Update: Thanks for the feedback so far, everyone!  I’ve attempted to fix the volume problem–can’t believe you people thought Tarkan should be turned down

And it looks really, really great!  It doesn’t look like these toys are available yet, but as soon as they are… :-)  The Dai-dö line of toys has the look of the Tuyo and the Onye, but are made of aluminum, silicone, and steel.  Yum.  The image above (from bigteazetoys.com) is of #6, which means that there are 5 other designs for you to go check out.  I’m in love at first sight with #5 and #6. 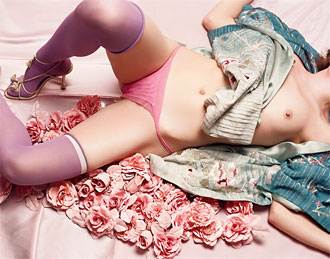 Pleasurists is your round-up of the adult product reviews that came out in the last seven days from bloggers all around the sex blogosphere. Did you miss Pleasurists #12? Read it all here. Do you have a review for Pleasurists #14? Submit it here before Sunday February 1st at 11:59pm PST. Please re-post this list on your own blog if listed.

Want to win some free swag? All you’ve got to do is enter.

On to the reviews…

My latest review is up at EF: the Dichroic Spiral.  It’s glass, it’s pretty, it’s awesome.

OK, so this is my first HNT.  I’m not the most body-confident person in the world, especially since I gained a bunch of weight on antidepressants recently.  So, we are going to start from here and hopefully move on to more scandalous things in the future.

Smart Balls vs. Luna Beads: Let’s get ready to ruuumblllllllllllle!

It’s the match-up of the century!  OK, yes, hyperbole.  So I know there are roughly 126,039,859,948 reviews of Smart Balls and Luna Beads out there, and mostly they’re positive.  I’m not trying to be redundant, but I thought a side-by-side, point-by-point, ball-by-ball comparison of the two systems might be useful for someone trying to decide between them.  Off we go!

Price: The Smart Balls clock in in the $20 to $25 range, depending on where you purchase them.  The Luna beads are a little more pricey, generally in the $35 to $45 range.  For the extra money, you get a reusable storage box and two sets of differently-weighted balls with the Luna Beads.  And a one year warranty.

The Smart Balls weigh  in at 40 grams.  The Luna Beads, depending on which weighted balls you have in the girdle (the pink balls are lighter), range from 28 to 74 grams.  (Both toys are made in Europe and I’m too lazy to convert out of metric.  It’s late.)

Materials: The Smart Balls are made of elastomed (otherwise known as thermoplastic elasomer), which is flexible and phthalates-free.  The Luna Beads themselves, on the other hand, are made of plastic, while the girdle that holds the two balls together is made of white silicone.

Experience: I tested each toy for about a week, week 1 the Luna Beads (I’m still on the lower weight pink balls), week 2 the Smart Balls.  I used them for about 30 minutes a day, going about my activities: walking to class, sitting in a boring talk, etc (my life is so exciting).  One thing I noticed right away when I tried the Smart balls is that I found them a little uncomfortable.  It wasn’t constant, definitely more on and off.  It wasn’t a high degree of discomfort, but it was definitely noticeable compared to the Luna Beads.  I might just have a short vaginal canal or something, but I concluded that the discomfort was due to the larger size of the Smart Balls.  The middle part between the beads is definitely more flexible in the Luna Beads than the Smart Balls, which also may have contributed to the minor, occasional discomfort.

Insertion was a little more difficult with the Smart Balls than the Luna Beads, but putting lube on both balls helps a lot (just don’t use silicone lube with the Luna Beads, since the girdle is made of silicone).  I couldn’t really feel the weighted balls in either toy unless I was moving around a lot.

During my Luna Bead week, I also tried removing the ball with the retrieval string from the girdle and inserting it by itself.  You definitely get more of a traditional Ben Wa kind of experience this way, and it felt like I was getting more of a workout since the diameter of the ball is smaller without the girdle.

In the end, I think I felt more of a difference in muscle strength with the Luna Beads.  Maybe it was because I was more enthusiastic about clenching them because there was no risk of discomfort.

Opinion of the rando who owns this blog: Honestly, I like the Luna Beads better.  You get a lot more options: you can vary the weight for resistance training of the pelvic floor muscles and you can use the balls individually without the girdle and get a more intense workout.

That said, the differences I’ve noted above between the Smart Balls and the Luna Beads really are nitpicky and minimal.  I experienced a little discomfort, but it should be noted that LOTS of other people don’t.  Both toys are easy to use and to clean (if anything, the Luna Beads are a little more high maintenance since you can’t use silicone lube).  A point in the Smart Balls’ favor is that they come in a huge array of colors.  As you can see from the picture above, mine is the metallic green/silver combo, which I think is gorgeous.

I’ve decided I’d like to try using my Pure Wand as a kegelcisor, and eventually as a follow-up to this post I’ll compare the ball system to the wand system.  Stay tuned!
Note: Fun Factory manufactures a single ball Smart Ball-type thing called the teneo uno.  It doesn’t appear to be marketed in the US at the moment, but if/when it is, I’m all over it.

“Hail to the Chief, he’s the chief and he needs hailing.”

I totally cried during that speech.  Unbelievable.  :-D